There is a unique sense of anxiety around building an app for a one-night event; as days grow closer, we watch with anticipation as participants sign up to validate an idea…much later than the typical feedback loop for other products. But last month, we were particularly excited to witness just how many people around the country (and beyond) were using one of our products to sign up to share a single meal with complete strangers.

On June 25, T R I M and 14 other organizations including Woman’s March and The Movement for Black Lives partnered with Dream Defenders, a South Florida non-profit, to launch a coast-to-coast night of solidarity and dialogue by sharing a place at the dinner table. By the start of the evening, more than 11,000 participants had committed to being a part of one of 375 hosted dinners, bringing communities together for a meal with meaningful discussion. The Day of Dinners project empowered hosts to hold meals across all 50 states and countries beyond, including Thailand, Mexico and Barcelona. 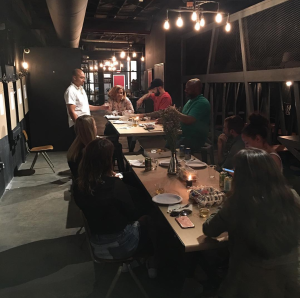 Dream Defenders created Day of Dinners out of the belief that “creating a better world can start if we open our doors to one another, listen to each other’s stories, and gather to break bread rather than build walls.”

One of our very own product developers, Steve Gilliam, shares a passion for using technology to make an impact on the world. Steve presented the opportunity for T R I M to step in as the technology partner, building a product that could handle the signup and coordinating process that paired hosts with attendees based on their respective locations.

“What I learned is that we, as normal citizens, hold the power. We have the power to fight about injustice and it all starts with a conversation with people that are different. When we connect we are strong. The powers that be know this so they promote fear and division.”

“So grateful for an evening filled with laughter and stimulating conversation with complete strangers. How can we build a better tomorrow if we don’t engage in dialogue? We need more fellowship in our neighborhoods and society. It’s one way to build community.”

We are proud to be a part of such a meaningful project and passionate organization to help better the community. If you are a part of a non-profit with a mission to put a dent in the world, contact us below and let’s discuss working together: